Navigating over-indebtedness in Czechia. Struggling debtors’ perceptions of personal bankruptcy/Resistance to (semi)peripheral financialization: the case of the Frankowicze

Sociological Institute of the Czech Academy of Sciences invites you to the autumn cycle of Sociological seminars. 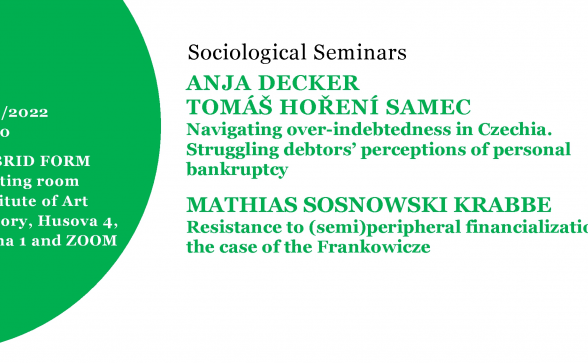 Despite abundant literature on governance of debt, a key context is largely missing in the research of over-indebtedness: the perceptions of one's own personal bankruptcy procedure. Drawing on narrative interviews with 29 debtors, we show how filing for bankruptcy is aspired to by those seeking to exit dead-lock situations of financial precarity and economic vulnerability. The accounts reveal that it also constitutes a crucial moment of moral ambiguity, when the stigma connected with overindebtedness both materializes and can be narratively overcome through accenting one’s personal transformation and effort, but also enabling a critique of the existing debt (enforcement) system. We highlight the deeply paradoxical and ambiguous symbolic and practical meanings of undergoing personal bankruptcy and argue that the theoretical notion of financial subjectivity transformation should be understood as situated and contextual, as a narrative performance rather than essentialistic finite change.

This presentation focuses on the current and successful debt contestation by the colloquially known social group “Frankowicze”; Polish households that in the mid-to-late 2000s took out a foreign currency (FX) mortgage loan, which was promoted as financially advantageous despite tying (unknowing) households to a volatile global currency market. Particularly, after the burst of the housing and credit boom, these indebted households would experience - and become part of - a specific form of (semi)peripheral financialization seen in Poland and more broadly in the central and eastern European context (Halawa 2015; Mikuš 2019).

Despite gathering wide public and political attention, no policy involving currency conversion was implemented as seen in e.g. Hungary or Croatia, leaving Polish FX households particularly exposed. Going beyond the domestic household accounting practices, this presentation highlights how FX households are organized into various associations that help carve out a successful path to contest the near-hegemonic morality of having to repay one’s debt. This involves individual litigation on a massive scale, navigating between national and European legal frameworks, and dealing with further (financial) uncertainty due to the several-year-long court proceedings in which new legal and financial claims are postulated by banks.

Anja Decker is a Cultural Anthropologist based at the Institute of Sociology of the Czech Academy of Sciences. She has been trained at Humboldt-University Berlin and Ludwig-Maximilians-Universitat Munich and was a visiting fellow at Charles University and University of West Bohemia. Her research interest lies in the field of social and spatial inequalities, which she approaches with a focus on diverse economies, resilience and informality.

Tomáš Hoření Samec is a sociologist, working at the Institute of Sociology of the Czech Academy of Sciences. He completed his doctoral studies in sociology at the Faculty of Social Sciences of Charles University. His research focuses on the discourse on housing and mortgages, on the financialization of housing and on new forms of housing provision by public and collective actors.

Mathias Sosnowski Krabbe is an anthropologist based at the Max Planck Institute for Social Anthropology/Halle (Saale), Germany. He has worked as a Research Assistant at Aalborg University, and as an Assistant Lecturer and later Research Assistant at the University of Southern Denmark. From October 2020, he is researching household debt in Poland as part of the DFG Emmy Noether Research Group "Peripheral Debt: Money, Risk and Politics in Eastern Europe"

The seminar is freely accessible for those attending f2f, if you intend to attend online, please fill in your email here  and we will send you a link on the day of the seminar.