Political Apologies, their Content, and Protagonists: Experimental Evidence from Victims and Perpetrators Nations

Political apologies are recognized as a feature of effective diplomacy, projections of soft power, and instances of transitional justice. They have been found to have a positive effect on justice, trust, and reconciliation. However, the efficacy of apologies has also been questioned. This talk examines the acceptance of political apologies, their content and the protagonists in the victim-nation, the perpetrator-nation, and their subgroups. Guided by studies on the structure of apologies, it distinguishes ten features of apologies, seven of which concern their content and three their protagonists. Based on the analysis of apology statements by Japan to South Korea, the paper further breaks these features (factors) down into 32 elements (levels). Their acceptance is examined in a randomized conjoint experiment, which was embedded in large online quota-based surveys in Japan (n=2,700) and South Korea (n=3,000). The analysis reveals the relative importance of protagonists over the content of apologies; and the possibilities for acceptable apologies for both nations. The analysis of subgroup differences showed that apology features are less important for its acceptance than contemporary perceptions and ideology in the perpetrator-nation; but more important than the role of gender and age. 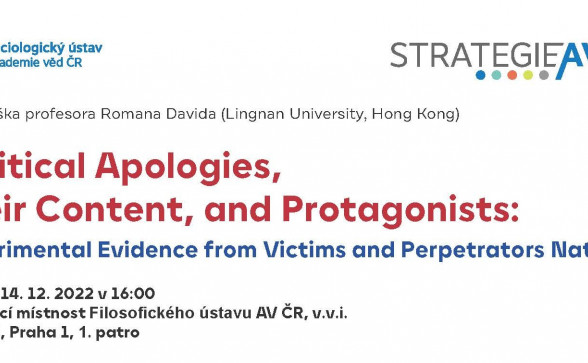 Roman David is a professor at Lingnan University, Hong Kong. After his studies in politics at Palacky and Masaryk universities, he worked at Masaryk University, Wits University, The City University of Hong Kong, Yale, and Newcastle University; and held visting positions at Oxford, Baptist University, and Harvard. At Lingnan, he served as the Associate Dean of the Faculty of Social Sciences (Research) (2015–2017) and the Head of the Department of Sociology (2017– 2020). He conducts interdisciplinary research, spanning political sociology, political psychology, and law & society, focusing on transitional justice and democratization. His book Lustration and Transitional Justice (University of Pennsylvania Press, 2011) conceptualizes exclusive, inclusive and reconciliatory personnel systems, for which it received the Concept Analysis Award by the IPSA in 2012. His book Communists and Their Victims (University of Pennsylvania Press, 2018) uses surveys, survey experiments and qualitative methods to examine the impact of justice on victims, perpetrators and society; and proposes the transformative theory of justice. His co-authored book (with Ian Holliday) Liberalism and Democracy in Myanmar (Oxford University Press, 2019) proposes the concept of limited liberalism to explain various puzzles of political culture in democratizing countries. His articles appeared in the American Journal of Sociology, Political Psychology, Law & Social Inquiry, and other indexed journals.

The presentation will be conducted in English.

The research was supported by RGC Hong Kong (GRF grant 13643616). The lecture was prepared in cooperation with Mr. Tam Pui Chuen, member of the research team.

The seminar is freely accessible for those attending f2f, if you intend to attend online, please fill in your email here  and we will send you a link on the day of the seminar.