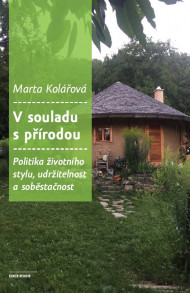 This book examines collective and individual forms of lifestyle politics and political consumerism in the environmental sphere. Lifestyle politics is about how citizens become involved in politics through their everyday decision-making and it includes the ethically, morally, and politically motivated choices they make about consumption, transport, energy use, and other lifestyle habits. It involves activities that seek social change by choosing a lifestyle that is based on the values ​​of an individual or a group. What constitutes lifestyle politics varies, but it often has to do with environment issues and sustainability. Sustainable practices and lifestyle changes, which can include, for example, ethical shopping, switching to a vegan diet, reducing energy consumption, using more sustainable modes of transport, or the individual and collective projects people engage in to produce their own energy or food.

Lifestyle politics and political consumerism in Czechia are examined here from the perspective of sustainability and self-reliance and in both collective and individual forms.  The core part of the book is an analysis of people and families who want to live in harmony with nature, be self-reliant, and live a DIY (do-it-yourself) life. The author studies how self-reliance meets sustainability in ‘green prosumption’ (the combination of production and consumption in a household) of and in practices such as growing one’s own food, cooking from scratch, permacultural gardening, natural building, migrating to rural areas, and off-grid living. The author argues that sustainable and DIY lifestyles are not practised by individuals in a social vacuum, they are promoted by various actors – movements, organisations, and associations – who support individuals in changing their lifestyle and consumption and offer them ethical guidance. These various groups help to convince individuals that an individual change of behaviour makes sense and that, if implemented by enough people, it will lead to the kind of larger change in society that the group desires to achieve in society. The author examines the movement organisations of permaculture, ecocommunities, and food sovereignty that are part of the ‘sustainable consumption movement’ and the ‘back-to-the-land movement’ more specifically.

The book reports on the results of qualitative sociological research that was conducted from 2017 to 2019 in spaces that are occupied by permaculture and related movements and in the households of people who live according to the ideas of sustainability and self-reliance. The analysis worked with the method of grounded theory. The data were collected through in-depth interviews with eco-DIY practitioners and representatives of sustainability movements and through participant observation and informal conversations conducted in the homes of these people or at various festivals, courses, and meetings where they come together. The analysis also studied various documents and websites of organisations and individuals and the alternative medium Pravý domácí časopis, which provides a space for these practices.

An analysis of the ideological frameworks (Snow and Benford 1988) of these movements showed that the organisations mobilise participants mostly through prognostic and motivational frameworks, by outlining the desired state and solutions rather than by criticising and pointing out the culprits of problematic situations. Their main values they have in common are living life in harmony with nature, sustainable living, sustainable consumption, healthy land, and healthy and local food. As well as their prognostic and motivational frames, they also have a common purpose, which is to change lifestyle and consumption patterns. All of them emphasise the role of the individual as a responsible actor, especially in food consumption and production systems, but also in the way of life more broadly.

The movements differ in the types of community they create: permaculture is quite individualistic in Czechia, individuals each work on their projects independently, but permaculture as such creates a community of interest; an ecovillage is a collective project,  an intentional community that is established by people from cities who want to move to a rural area together; and the food sovereignty movement forms communities of local consumers who support farmers and their sustainable methods of food production. Different theoretical concepts can be used to characterise movement organisations: Czech permaculture can be understood as a lifestyle movement according to Haenfler et al. (2012), while an ecovillage is an example of a sustainable community movement (Forno, Graziano 2014), and the food sovereignty (CSA) movement is best characterised as a sustainable materialist movement (Schlosberg 2019).

The author studied sustainable and DIY lifestyles and movements within the cultural space of ‘eco-bio’ subculture, a segment of society characterised by the values of sustainability, DIY, autonomy, and transcendence (alternative spirituality). The author compares this Czech subculture to the theoretical concepts of the Cultural Creatives subculture (Ray, Anderson 2000), the new domesticity (Matchar 2013), and the plenitude movement (Schor, Thompson 2014). The similarities of this Czech subculture to that of the Cultural Creatives are an orientation towards a sustainable lifestyle, pro-environmental values linked to alternative spirituality and personal development, and also the fact that both subcultures are dominated by women. Aspects of the new domesticity found in the Czech subculture include the reclaiming of homemaking, a focus on DIY and sustainability, and new parenting styles. Elements of alternative lifestyles described within the plenitude movement can also be found in Czechia: sustainable lifestyles, self-reliance and DIY, community organising and the reduction of paid employment, the decision to leave corporate jobs, and efforts to find more meaningful work.

The second part of the book deals with individual strategies of lifestyle change and consumption practices. Sustainable practices are influenced by the pro-environmental values of people within the eco-bio subculture. They are very motivated to make a difference and hope that by changing their own individual behaviour in everyday life they can help to change society. To this end they use several sustainable lifestyle strategies: consumption in the form of shopping, anti-consumer behaviour, self-reliance, DIY, and community forms of consumption. Sustainable lifestyles and sustainable consumption can be practised in many areas of life, in food, housing, transport, leisure, and consumer goods. The data show, moreover, that these sustainable practices extend even beyond consumption to work and employment. Some individuals even chose to transform their lifestyle into an environmentally sound small business. Therefore, when talking about sustainable consumption, it is also necessary to focus on the other side of the coin – production and work. This focus is supported by one of the emphases of the sustainable consumption strategies – self-reliance and DIY practices – that straddle the line between consumption and production.

Green prosumers have great motivations and make good efforts, but they are constrained by the social context, economic infrastructure, and norms of behaviour in today's society. Obstacles may be economic in nature, but they also manifest themselves in social relations, conflicts in families, or negative reactions from people around them. Practising a sustainable lifestyle is in many ways more difficult than living a normal one, and it is therefore made easier when not only altruistic motives relating to nature and other people are involved, but also self-centred motivations, such as health benefits or the pleasure and joy of contact with nature, which is in line with the concept of alternative hedonism by Soperová and Fafejta (2014).

DIY practices are understood as an indicator of sustainable consumption, especially in food self-provisioning, DIY natural building, or the household production of everyday goods. Self-reliance moreover transcends sustainable activities and represents a distinct variety of DIY culture that includes other practices such as homebirth, home-schooling, or DIY healing. Self-reliance is characterised by taking responsibility for one’s life into one’s own hands and by a distrust of public institutions. DIY is thus related both to creativity, manual work, home-based production, and a return to traditional crafts, and to autonomy and an emphasis on one’s own responsibility. Practices of green prosumption connect the tradition of socialist DIY with new innovative trends from abroad.

Some forms of green prosumption can be practised in cities, but they are more easily adopted in rural areas. DIY practitioners influenced by the ideas of permaculture tend to move out of cities to villages or remote places. While this is a form of amenity migration, these are people who want to be self-reliant and make a living off their piece of land and they are therefore interested in buying a larger plot of land. The author distinguishes four ideal types of eco-DIY practices in rural areas: homesteading, (micro)farming, family homesteads, and weekend gardening. Many practitioners of green prosumption are seeking to be self-sufficient, but in reality this is difficult to achieve and they also need to make money. Some of them then transform their self-reliant activities into a small business. They are many aspects of rural life that make their situation more complicated: having to commute, being dependent on cars, often having poor relationships with the old residents, and difficulty integrating into the local community. Some permacultural migrants live in intentional ecocommunities, but even for them it is impossible to completely fulfil the idea of self-sufficiency. Some green migrants ultimately move back to the city.

The aim of this book is to fill the gap between studies on sustainable lifestyles (Librová 1994; 2003; Librová et al. 2016) and environmental movements (Císař 2008; Novák 2017). The analysis has shown that individuals are influenced by movements, organisations, and the leaders who support and guide them in changing their consumption and lifestyle. However, the movements’ goals framed as positive values are in some ways difficult to accomplish and complete self-sufficiency in particular is an idea that is difficult to achieve in reality.