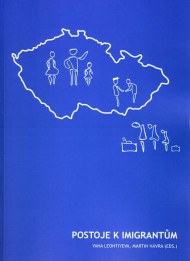 This study examines attitudes towards migrants. The authors focus on the attitudes in Czech society, but they also use data from international surveys in order to situate the attitudes of respondents from the Czech Republic in a wider context. The theme of the relationship between the ‘domestic population’ and foreigners is very current today. The inter-year increase in the size of the foreign population in the Czech Republic is one of the largest in Europe. The Czech Republic is attractive to foreigners, and with respect to the immediate future there is no known reason why this fact should change. Immigration is a global phenomenon that cannot just be halted. While immigration brings a number of advantages to the host country, such as economic and cultural contributions, clearly it also involves a number of challenges, among them in the area of relations between the majority population and foreigners. Surveys on attitudes towards immigrants will continue to be important in the coming decades, and for this reason the authors of this publication attempt to partly reconstruct the attitudes of the Czech population towards foreigners.

There are certain limits to the interpretation of the results of research on attitudes conducted using questionnaire surveys. One problem is that some respondents do not have a clearly formed attitudes towards the given object or phenomenon, but when they are answering survey questions they are required to pick one option and that chosen answer has the same weight of an answer given by someone who has a clear and established opinion. Another problem is that of ‘social desirability’, when some respondents answer not according to their own genuine opinions but they adapt their answers to what they view as socially acceptable. The third (and certainly not the last) complication is that people need not always act in conformity with their attitudes, but allow themselves to be influenced by context, by social restraints, and so on.

An analysis of attitudes towards different nations and nationalities showed that the Czech population has a more favourable opinion of people of the same nationality and of ‘related’ and ‘similar’ nationalities (not just geographically but also historically, culturally, and probably also physiologically). On the other hand, those nationalities that are remote to the Czech population in these three dimensions fare worst. Here of course it is not just about any firm criteria, and especially with regard to the perception of cultural similarities and differences probably many other social constructs and (dis)interpretations also play a role.

Czech respondents are not strong supporters of multicultural coexistence. They by far prefer that foreigners in the Czech Republic adapt to local customs. Nor do they place much importance on the value of cultural and religious diversity, and they are less inclined to agree with the idea of the state providing funding to support the cultural differences of minorities and migrants. The perception of foreigners as participants in the labour market in the Czech Republic is not very favourable either, especially when respondents are asked about the employment of foreigners in situations where it might put at risk jobs for Czech citizens. In this case the vast majority of respondents are in favour of restricting the employment of foreigners. However, it is also true that respondents value the work performance of foreigners.

The Czech Republic is significantly different from other new EU member countries in the sense that for many years it has ranked with states with the most intensive increase in the size of the foreign population. However, an international comparison revealed that with regard to perceptions of immigration this country is still more like less advanced countries of eastern and central Europe, which are much less affected by the issue of immigration. The Czech population still views migration as more of a burden and a negative phenomenon.
It is possible to say that Czech society has a tolerance deficit. The fact that as yet there has been no escalation of ethnic tension or successful, open assertion of an anti-migration atmosphere suggests, in our opinion, that the majority of the local population is not openly xenophobic. Nevertheless, it is impossible not to see a certain amount of intolerance that stems mainly from a fear of the direct competition posed by a cheap and flexible foreign labour force, from negative historical experiences, and finally also from their prejudices and stereotypes, which are not often based on personal knowledge of or experience with foreigners.

This publication is more of an exploratory analysis of selected attitudes towards migrants and minorities than a complex analysis of one narrowly defined theme. In the appendix to this publication there is a list and description of individual sources and relevant studies that could also be useful for further in-depth analysis. Future research could probably focus on revealing and assessing the influence of various factors that shape and influence these attitudes. The data available in the Sociological Data Archive of the Institute of Sociology AS CR and from other partner archives directly warrant such research.

Project:
Data sources, research on data quality, standards, and methods of data harmonisation for the purposes of international comparative social research and integration into the CESSDA network
Share this page